Vlora, Albania | June 06 (Tirana Echo) – Albania aims to turn into a top destination of the Mediterranean touristic package, while the government is committed to improving infrastructural links in the south with a major tunnel and new airport in Vlora ready by 2020 – has said Albania’s prime minister Edi Rama today.

Speaking this morning at the Marina of Orikum near the southern coastal city of Vlora, Rama said his government will press ahead with plans to drill a new milestone tunnel in the mountain of Llogara, drastically shortening the distance from Vlora to the Albanian Riviera while accelerating the building of a new airport in the area by 2020.

“We aim to turn Albania into a top destination of the Mediterranean package to the international tourism market, as our touristic potentials have not yet been exhausted. We will need to press ahead with the new Orikum-Llogara road as well as with the new tunnel of Llogara, which is a strategic necessity to reach the south faster.” – said Rama in Orikum.

Albania has seen a constant growing trend of visitors and tourists since 2009. Last year over 5 million people visited Albania, compared to under 2 million in 2009. The government and tour operators expect a huge increase during 2018 as Albania improves its touristic offer and coastal infrastructure. 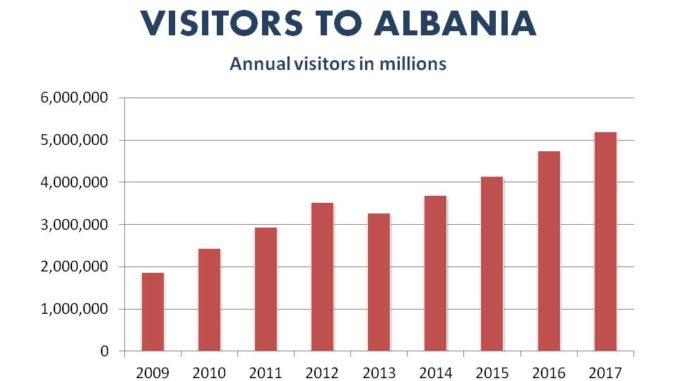 Rama promised to accelerate negotiations with the Turkish consortium which has agreed to turn the old military aerodrome of Akërnia in Vlora into an international airport of modern standards.

“We are negotiating the contract for the new Airport of Vlora which is a major investment. We will complete work faster than we previously thought, and we hope to have it opened and functional before 2020,” – said Rama.

A Turkish consortium currently building the world’s largest airport in Istanbul, has offered to build the new southern Airport of Vlora in Albania.

Albania’s infrastructure minister recently said the new airport will have larger capacities than the current Tirana International Airport, which has held exclusive operating rights over Albania under a Hochtief Consortium led 20-year concession contract obtained in 2005.

Albania has been receiving increasing world attention for its touristic potentials, often called as the ‘Last Secret of Europe’, for its crystal blue waters and its unspoiled white pebbled beaches in the southern Riviera, just across Corfu.  Its capital Tirana was this year featured in Lonely Planet’s Best in Europe 2018 list as one of the top 10 destinations to visit.