Last week Montenegro became one step closer to becoming a full-fledged member of the North Atlantic Alliance after the country’s parliament ratified the NATO membership agreement despite popular discontent. According to analyst Igor Pshenichnikov, one person in particular, former President and Prime Minister Milo Djukanovic, is behind this. 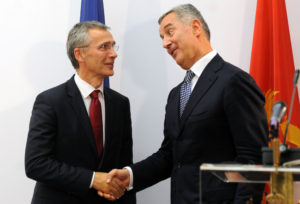 Djukanovic’s close links to organized crime are “an open secret” in Montenegro, Serbia and the Balkans in general, as well as Brussels and Washington, the analyst observed. Serbian media outlets have published multiple stories detailing that during the war chaos in Yugoslavia in the 1990s Djukanovic was involved in smuggling cigarettes to Europe.

Pshenichnikov maintained that Djukanovic was an ideal person for NATO since he was “obedient and controllable” due to the sheer amount of damaging material the US-led military alliance had on him. The bloc, he added, used the Montenegrin politician to force the country to divorce Serbia and later “drag the republic into NATO.”

The latter was accomplished through a vote in parliament instead of a referendum, the only possible way since the majority of Montenegrins are opposed to NATO membership.
“Even pollsters controlled by Montenegrin authorities released data showing that 50 percent of the population is against Montenegro joining NATO. According to surveys released by patriotic organizations in Serbia, this figure in fact exceeds 60 percent,” Pshenichnikov said. “The outcome of a referendum, if it were held, has always been clear to everyone. This is why Djukanovic and his Democratic Party of Socialists of Montenegro were fiercely opposed to a referendum.”

Following the April 28 vote in the parliament, the Russian Foreign Ministry issued a statement expressing “deep regret that the current leadership of [Montenegro] and its Western backers didn’t heed the voice of conscience and reason.” The move, it added, came in “violation of all democratic norms and principles.”

Hungary has angered EU leaders and its neighboring countries with today’s referendum to oppose EU quotas on relocated asylum seekers. As Hungarians take to the polls today to have a say in what Hungary does […]

French police have arrested the former prime minister of Kosovo based on a Serbian arrest warrant for alleged war crimes, in a move that will spark strong reactions from Kosovo’s political class and its Albanian […]

SPECIAL REPORT Born out of the break-up of Yugoslavia, Kosovo and Bosnia-Herzegovina are two of the poorest countries in Europe. Despite high levels of international aid, the situation is alarming – says Arte, a Franco-German […]

Tirana, Albania | Tirana Echo -Russia is heavily engaged on a media offensive to spread ‘Greater Albania’ fears across the Balkans and counter-balance US influence in South East Europe. In its latest propaganda ‘attack’, the […]

Jean-Claude Juncker, president of the European Commission, has delivered a blunt warning to Donald Trump against encouraging countries to copy Brexit, arguing that a break-up of the EU could trigger war in the western Balkans. […]