According to the airline’s official website, Tirana will be connected to Schiphol airport in Amsterdam, with a one-way ticket costing Euro 39 while a round trip ticket will cost Euro 78. The company has foreseen two flights per week respectively on Wednesdays and Fridays.

The news was confirmed by Dutch Foreign Minister Bert Koenders during his trip to Albania’s capital Tirana yesterday.

“There is still an untapped potential with the Netherlands in terms of tourism. So today I am pleased to share with the the news that from May 10th 2017 the company of Transavia will initiate direct flights between Amsterdam and Tirana, which will help boost relations between our two countries.” – said Koenders during his press conference in Tirana with his Albanian counterpart.

Transavia already provides seasonal direct flights between Tirana and Paris and the announcement to add Amsterdam as an additional destination will please Albanian travelers who suffer from high prices and low options compared to their regional neighbors. 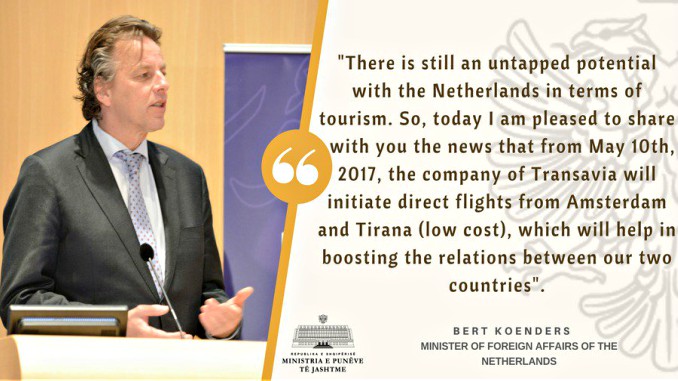 The news comes as Hungarian Wizz Air, the largest low-cost airline in Central and Eastern Europe, has started its first service connecting Tirana with Hungary’s capital, Budapest with two weekly frequencies, on Wednesdays and Sundays.

On April 1, 2016, the Albanian government and Tirana International Airport (TIA) signed an important agreement that paves the way to the liberalization of air transport and international flights.

According to the joint agreement, TIA’s concession was extended for two years in order to open Kukes airport for international flights.

Sarajevo | June 06 (Tirana Echo) – The Western Balkans is set to experience increasing high temperatures with up to 5.0°C by the end of the century, endangering human health, public safety and the quality of […]

Belgrade, Serbia | 29 Jan 2019 (Tirana Echo) – Serbian President Aleksandar Vucic has confirmed Serbia’s relations with China are at a historic high and expressed the hope he would this year have an opportunity […]