Albania seeks to contain the spread of cannabis plantations

IT IS peak season and dozens of sweat-drenched men are labouring in the fields near the Albanian town of Tragjas, harvesting a bumper crop of cannabis. Overseeing them are policemen with submachine-guns and face masks. Saimir Tahiri, Albania’s interior minister, swoops down in a helicopter to observe the destruction of the plantations. Piles of two-metre high bushes are set on fire. Mr Tahiri admits the choking fumes can be a problem for the policemen but adds that this is the least of their concerns. Europe’s drug war is being fought here, he says, and billions of euros are at stake.

Albania is a major entrepot of the European drugs market. The country has long been a base from which criminal gangs smuggle everything from cigarettes to heroin, cocaine, cannabis resin and other illicit substances into the rest of Europe, according to the European Monitoring Centre for Drugs and Drug Addiction, Europe’s drug agency. Increasingly, Albania has also become a big outdoor producer of the cannabis herb, which is distributed with the help of a complex network of Albanian organised-crime groups.

One of the biggest destinations is Italy, where dope is smuggled in on speedboats, lorries and private planes; last month smugglers tried to slip through on jet skis. One Italian newspaper headline declared, only somewhat hysterically, that “rivers of drugs” are flowing from Albania to its shores. Each day this summer Italy’s Guardia di Finanza, a paramilitary police force, has overflown Albanian territory to relay the co-ordinates of cannabis plantations to Mr Tahiri’s men. Nearly all reported plantations are destroyed, he says. By late August this year, he claims his men destroyed a million cannabis plants—up from the half million recorded in 2014.

Others are less sure. Locals complain that several plantations—those which are hardest to get to—have survived. Albanian politics is rich with accusations of links between politicians and the drugs mafia. 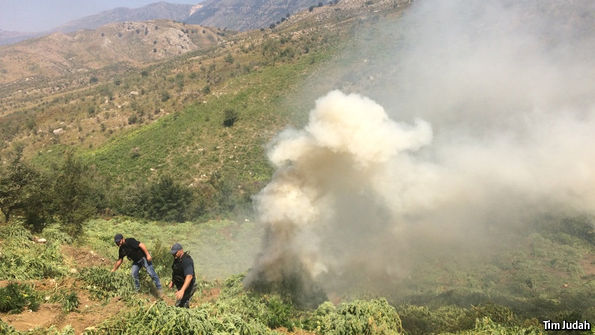 Lulzim Basha, the head of the opposition Democratic Party, claims that even Mr Tahiri himself is protecting key drug lords. Mr Tahiri vehemently denies the claim. Mr Basha also alleges that during the election campaign three years ago Edi Rama, Albania’s Socialist prime minister, made dirty deals with local mafiosi in order to deliver votes; now, he thinks, Mr Rama is in hock to them. The Socialists dismiss this; they argue instead that in the eight years when Mr Basha’s centre-right party was in charge cannabis was openly grown in the small village of Lazarat. Production was so extensive that it was reported by the interior ministry be worth to €4.5 billion ($6 billion), or half of Albania’s GDP, in 2014, when Lazarat was raided by police.

Through the haze of burning cannabis, facts are difficult to establish. Plantations have spread beyond Lazarat. But Italian officials refuse to talk about whether the Albanians are serious in dealing with them. Last year Dritan Zagani, a senior Albanian policeman, sought political asylum in Switzerland after allegedly telling the Italians about a new drugs route; the Albanian police say he was leaking information to the mafia.

One diplomatic source says that the cannabis problem is “getting worse”. But regardless of the true scale of the eradication, it is unclear whether the policy has any real impact. Other countries, such as Morocco, also supply pot to Europe. In Latin America the destruction of coca bushes generally hurts small producers but leaves the kingpins untouched. Mr Tahiri is defiant, however. Despite tiny resources pitted against big drug money, he says, his men are working better than ever this year. For the Albanian government it is a question of law and order, and of credibility in Europe—particularly as it seeks to join the EU. Mr Tahiri says mafiosi should know there are “no more untouchables”.