His comments to a Moscow news conference came less than two days after the European Union’s enlargement commissioner, Johannes Hahn, visited Skopje in another bid to help break a political deadlock that has left the country’s parties unable to form a government since an election in December.

The crisis has sparked inter-ethnic tension, as three ethnic Albanian parties push for Albanian to be designated a second official language as a condition to joining any coalition government. That has led to daily protests for three weeks. 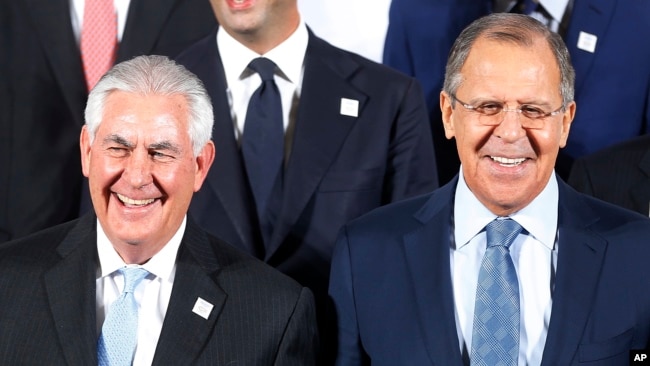 “The current situation in Macedonia — I’d even call it a crisis, in many respects provoked artificially — is leading to the situation when attempts are made to split the society,” Lavrov said, adding the West should realize “the danger of such attempts.”

He also said he found it perplexing that Russia’s activities in the Balkans were considered provocative. Russian relations with Balkan nations shouldn’t be a cause for concern in the West, he said.

Official: West should be concerned

In an apparent rebuke, Macedonian Foreign Minister Nikola Poposki told VOA that the West should be very concerned.

“We can perfectly imagine that a global power like Russia would have interests pretty much everywhere around the world,” he told VOA’s Macedonian service after spending a day meeting with U.S. legislators in Washington.

“What really matters is what would be in the interest of the countries in the region,” he added. “Regarding Macedonia, we are clear that EU and NATO membership are our priority. And we would like to achieve these objectives because we believe that this is the best recipe for peace, stability and economic prosperity in our region. We remain committed to these goals.”

European Union leaders and analysts have said the mounting political confrontation in Macedonia could spin out of control, adding to increasing ethnic tensions across a destabilizing Balkans.

Last week, Serbian Prime Minister Aleksandar Vucic warned of serious consequences if the European Union does not give western Balkan countries a clear message about joining the bloc, citing growing nationalism and pro-Russian sympathies in the region.

On Monday, Montenegro’s Foreign Minister Srdjan Darmanovic said U.S.-led NATO allies have been supportive of an investigation into what Montenegrin prosecutors are calling a pro-Russian plot to overthrow the country’s pro-Western government to prevent it from joining the European military alliance.

Montenegro’s bid to join NATO is awaiting approval from the U.S. Senate.

U.S. Secretary of State Rex Tillerson said Wednesday that Montenegro’s accession to NATO would create a contiguous border along the Adriatic coast.

“Since Montenegro borders five other Balkan nations, including NATO allies Croatia and Albania, its NATO membership will support greater integration, democratic reform, trade, security and stability with all of its neighbors,” he said.

The Montenegrin, Serbian and Macedonian ministers were in Washington for a State Department conference of the global coalition to defeat Islamic State.

This report was produced in collaboration with VOA’s Macedonian and Serbian services. Some information is from AP.

Who’s the Man Behind Operation ‘Drag Montenegro Into NATO’

Last week Montenegro became one step closer to becoming a full-fledged member of the North Atlantic Alliance after the country’s parliament ratified the NATO membership agreement despite popular discontent. According to analyst Igor Pshenichnikov, one […]

Courts in Serbia are still sitting on a number of extradition demands, some dating back years, potentially causing concern to the EU. Serbia’s Justice Ministry told BIRN Belgrade is seeking extradition of 120 person from […]

Informal Power: The Men behind the Curtains – Freedom House

In many countries across the Nations in Transit region, the most important political figure either holds no elected office or rules from a post vastly inferior to his real status. Informal power undermines institutions that are meant […]

Belgrade, Serbia | Sept 04 (Tanjug) – Serbia’s Foreign Minister Ivica Dacic says a solution is being sought for the Kosovo issue and that delimitation with the Albanians is just one idea – “but there […]

Croatian Parliament has approved the country’s new conservative government led by Prime Minister Andrej Plenkovic who has vowed to recover the economy and move the country out of political stalemate. On Wednesday evening, after a […]