The key to the current political crisis convulsing Macedonia might just be a single phrase heard on one of the leaked wiretap recordings that shook that Balkan country two years ago.

At one point in the tapes, then-Finance Minister Zoran Stavreski and other cabinet ministers are discussing the falsification of economic figures to cover up their corruption and incompetence. And Interior Minister Gordan Jankuloska is heard to say: “One day, we will go to prison for all this.”

Now, Macedonian President Gjorge Ivanov has declined to invite opposition Social Democratic Union (SDSM) leader Zoran Zaev to form a new government, even though Zaev managed to form a coalition with three ethnic-Albanian parties that would control 67 seats in the 120-seat parliament.

Ivanov, who was supported for the presidency by the longtime ruling VMRO-DRMNE party, argued on March 1 that the Zaev coalition’s platform — which includes broader legal protections for the Albanian language — was tantamount to “a platform of a foreign country” and a threat to Macedonia’s sovereignty.

But such arguments ring hollow for many analysts.

“Suddenly they jump to the defense of some national interest and start talking about federalization or other matters that are completely unrelated to the current political situation,” said Pero Dimshovski, a former state secretary with the Secretariat of European Affairs.

Dimshovski accused VMRO-DPMNE of trying to turn a political crisis into a civic crisis in order to prevent the opposition from taking power and beginning criminal proceedings into abuse-of-power allegations from the party’s decade of rule under former Prime Minister Nikola Gruevski.

Florian Bieber, director of the Center for Southeast European Studies at the University of Graz, agreed that Ivanov’s gambit is “about preventing any kind of criminal investigation.”

“If the party would lose power,” Bieber told RFE/RL, “it would lose many instruments to prevent any kind of serious investigation into the abuses of the past.”

The timeline of the current crisis in Macedonia began in February 2015 with the revelation that the VMRO-DPMNE had wiretapped some 20,000 people — civilians, journalists, political opponents, and others. The revelations implicated Gruevski and many other high-ranking officials of the former government in serious accusations of abuse of office, including vote rigging, media manipulation, and embezzlement. 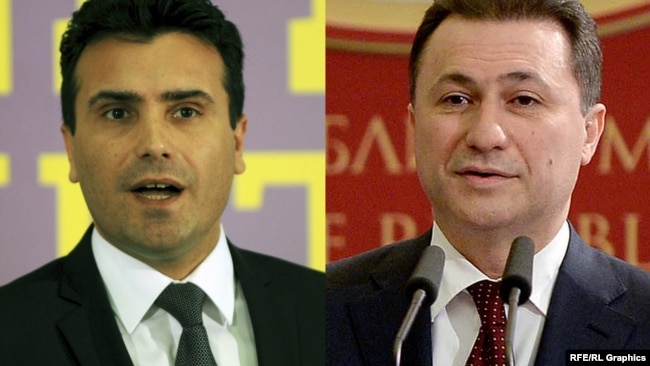 Massive antigovernment protests led to a European Union mediation effort that created a Special Public Prosecution (SJO) to investigate the wiretapping, the resignation of Gruevski’s government, and the organization of early parliamentary elections that were held in December. The SJO’s mandate expires in March and there is little expectation that a VMRO-DPMNE government would extend the probe.

In April 2016, Ivanov issued a preemptive pardon to Gruevski and 55 other politicians and associates who were, in Ivanov’s words, “politically exposed.” The pardons sparked another wave of mass protests, compelling Ivanov to back down and cancel the move in June, on the eve of a visit by Germany’s special envoy for Macedonia, Johannes Haindl.

Neither the VMRO-DPMNE nor the Social Democrats won a clear majority in December, leading to months of negotiations with the three small ethnic-Albanian parties, including the Albanian Democratic Union for Integration, which had been the ruling party’s coalition partner for many years. In the end, Zaev and the Social Democrats were able to forge the coalition — meaning that Ivanov was seemingly required by the constitution to give him a mandate to form a government.

But he didn’t. And critics accuse him of playing the ethnic card instead, manipulating tensions between ethnic Macedonians and ethnic Albanians, who make up about one-quarter of the country’s population of roughly 2 million. The fact that the SDSM and the Albanian parties have not publicized the text of their coalition agreement has given the ruling party an opportunity to manipulate public opinion against it.

“It seems to be an effort to ‘ethnicize’ a party conflict,” Bieber said. “This was a conflict over democracy or over a lack of democracy. And there have been multiple efforts by the ruling party to ethnicize it — to try to shift attention away from the crisis of democracy to some kind of ethnic issue.”

“Yes, this is an artificially imposed topic,” agreed Alexander Krzalovski, director of the Macedonian Center for International Cooperation. He said the platform of the Albanian parties amounts to nothing more than the implementation of the 2001 Ohrid Peace Agreement that the government signed after a brief conflict with ethnic-Albanian rebels.

Ironically, the anti-VMRO-DPMNE protests that developed after the wiretapping revelations included mass participation by all the country’s ethnic groups — Macedonians, Albanians, Turks, Roma, and others. This movement, Bieber noted, indicated that Macedonian politics were becoming less driven by ethnicity.

Seventh Day Of Protests In Skopje

However, since Ivanov stirred up the issue, thousands of VMRO-DPMNE supporters have taken to the streets to protest the so-called Albanian agenda. On March 7, in the latest incident, unknown vandals damaged a museum of the Albanian language in Macedonia’s second-largest city, Bitola.

The ruling party’s tactics are “very dangerous,” Bieber said, accusing it of “playing with fire” in order to hold on to power.

‘Soft Partition’ Of The Country?

Dimitar Bechev, a senior fellow with the Atlantic Council, agreed that the ruling party’s actions could “further deepen divisions” and even lead to a “soft partition” of the country, undoing all the power-sharing mechanisms that have been created under Western guidance since the country gained independence. 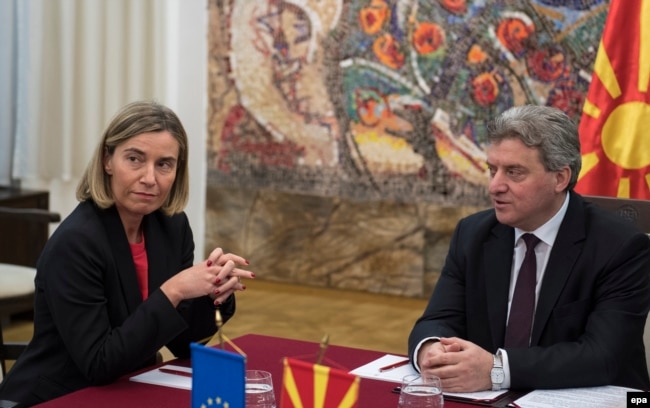 On March 2, during a visit to Skopje to discuss the crisis, EU foreign policy chief Frederica Mogherini warned of the potential to spark a conflict.

The same day, the Russian Foreign Ministry issued a statement accusing the EU and the United States of trying to overthrow the government by supporting the “ultimatum-like demands” of the Albanians and calling for an end to “outside interference in Macedonia’s internal affairs.”

Media in neighboring Serbia have been actively playing up the supposed Albanian threat and encouraging the VMRO-DPMNE protesters.

The way out of the crisis remains unclear. VMRO-DPMNE figures have called for another round of elections, but it is doubtful the opposition would agree to participate.

On the other hand, Ivanov and VMRO-DPMNE could back down, as they did on the pardons issue. This could come as part of a brokered deal under which the SDSM promised no “vendetta” against VMRO-DPMNE and the Albanian parties agreed to publicize and possibly moderate their platform, analyst Bechev said.

Bieber said such a deal would like have to provide “a pathway for [VMRO-DPMNE] to give up power and not fear jail.”

In the absence of such a deal, Bechev predicted, the country is in for a period of constitutional limbo, paralyzed state institutions, and rising ethnic tensions.