TETOVO, MACEDONIA — Ali Ahmeti, leader of the main ethnic Albanian party in Macedonia said the political crisis in the country could drag on for years and could be used by some politicians to ignite an ethnic conflict.The president has refused to back a coalition of the Social Democrats and ethnic Albanian parties after an election in December, arguing its pledge to allow wider official use of the Albanian language amounted to foreign interference in Macedonia’s affairs.

Their coalition agreement triggered street protests in several cities in which nationalists marched and waved Macedonian flags. Ethnic Albanians make a third of the population in the former Yugoslav republic.

“This is a political crisis and should be resolved with political means and not be made an inter-ethnic problem for the gains of some political parties,” Ali Ahmeti, leader of the Democratic Union for Integration (DUI), told Reuters late Tuesday. 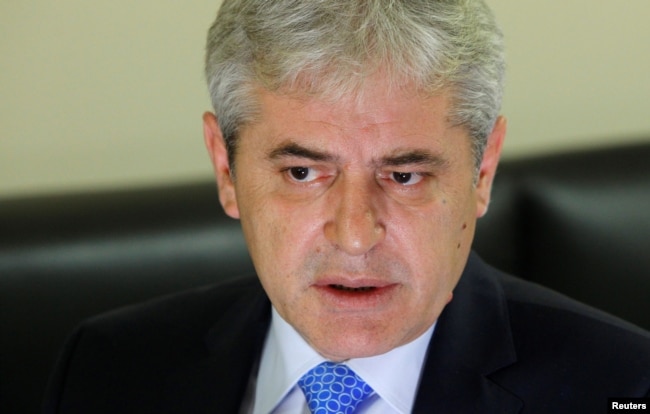 The head of Democratic Union for Integration, Ali Ahmeti, speaks during an interview for Reuters in Tetovo, Macedonia, March 7, 2017.

Ahmeti said the deadlock could continue for “up to four years,” when the next election is due.

The constitution is not clear on what happens if the president refuses to give mandate to a party, nor does it give a deadline for forming the government.

Ahmeti’s DUI, the biggest ethnic Albanian party in parliament, emerged as kingmaker following the Dec. 11 poll after neither of the two biggest parties — the nationalist VMRO-DPMNR and the Social Democrats — won enough votes to form the government themselves.

The DUI, which had been in coalition with VMRO-DPMNE for eight years from 2008 until 2016, announced it would support the Social Democrats led by Zoran Zaev.

Ahmeti, a former guerrilla commander, said that according to the coalition deal, Albanian would be used in state institutions and on banknotes. He also said the parties had agreed to elect an ethnic Albanian as speaker of parliament for the first time since the Balkan state seceded from former Yugoslavia in 1991.

Macedonia’s relations with its Albania minority have long been difficult. It reached the brink of civil war during an ethnic Albanian insurgency in 2001 before EU and other diplomacy defused the situation.

The EU’s foreign policy chief, Federica Mogherini, last week asked the president, who is close to the VMRO-DPMNE, to reverse his decision and urged political leaders to step back from a dispute that risked sparking conflict.

Greek tax service employees took their protest against bailout-driven austerity to the heart of government on Monday, as Athens waits to hear if its reform plans are enough to satisfy euro zone finance ministers meeting […]

The ongoing developments in the Balkans evoke strong memories of 1914, RIA Novosti contributor Dmitri Dobrov noted, warning that the region may soon turn into the powder keg of Europe again. It appears, however, that […]