Skopje, Macedonia | Tirana Echo – Respect for democracy will carry Macedonia forward, has said former Swedish foreign minister Carl Bildt who visited Macedonia this week and met with the country’s political leaders with no solution at sight.

Bildt’s visit was part of a study tour of the European Council on Foreign Relations (ECFR) in an attempt to try to understand internal dynamics but also offer a hand in solving Macedonia’s ongoing political stalemate which has paralyzed the small Balkan country for months.

“Democracy. Constitution. Europe. Respect for the three will carry Macedonia forward. That was my answer to media questions in Skopje now.” – said Bildt in his twitter account after meetings with Macedonia’s opposition SDSM.

However his visit was marked by controversy and media speculations as the former Swedish diplomat was allegedly ‘declined’ a meeting with the country’s President Ivanov, who refuses to grant opposition SDSM the right to form a governing coalition with smaller ethnic Albanian minority parties.

Although the president’s cabinet has remained silent, pro-government portal Republika in Skopje reported unofficially that Ivanov’s refusal was down to “constant EU interference in Macedonia’s own domestic affairs”.

Bildt insisted he was in Macedonia to listen to the political parties and that the solution is in the Constitution.

“Today, as you know, I had meetings with the political parties in Macedonia. They are the ones who need to find the path to a solution.” said Bildt in Skopje.

The ECFR co-chair met with leaders of opposition center-left SDSM and with Albanian parties DUI and BESA who have agreed to form a parliamentary majority and a government together, after no deal was found between former PM Gruevski’s VMRO-DPMNE and Ali Ahmeti’s DUI .

Bildt also met with Nikola Gruevski with no joint statement after the meeting. A statement by VMRO-DPMNE to pro government META News Agency said “The president of VMRO_DPMNE, Nikola Gruevski, together with the members of the party’s leadership welcomed the representatives of the non-government organization European Council for Foreign Policy, led by Carl Bildt. At the meeting, he announced the priorities of Republic of Macedonia and VMRO-DPMNE, which are well known to the general public.”

After a recent visit to Skopje, the President of the European Council Donald Tusk warned its leaders the small Balkan country is risking its EU and NATO integration.

However, as was the case with EU’s top diplomat Federica Mogherini and its Enlargement Commissioner Johannes Hahn earlier this year, Macedonian President Ivanov remained unmoved and said his position “remains unchanged” insisting he did not grant a governing mandate to Zaev as a preventive measure for his country’s stability, which would be endangered by Zaev’s so called ‘Albanian Platform’.

In addition to dismissing EU representatives, Macedonia has also accused its neighboring Albania of interfering in its domestic affairs, saying that Tirana is trying to influence the Balkan country’s ethnic Albanian minority.

The Macedonian Foreign Ministry said on April 4 that Skopje had summoned Albania’s ambassador to protest what it called Albania’s “open interference in Macedonia’s internal affairs,” and of trying to “change the constitutional order in Macedonia.” 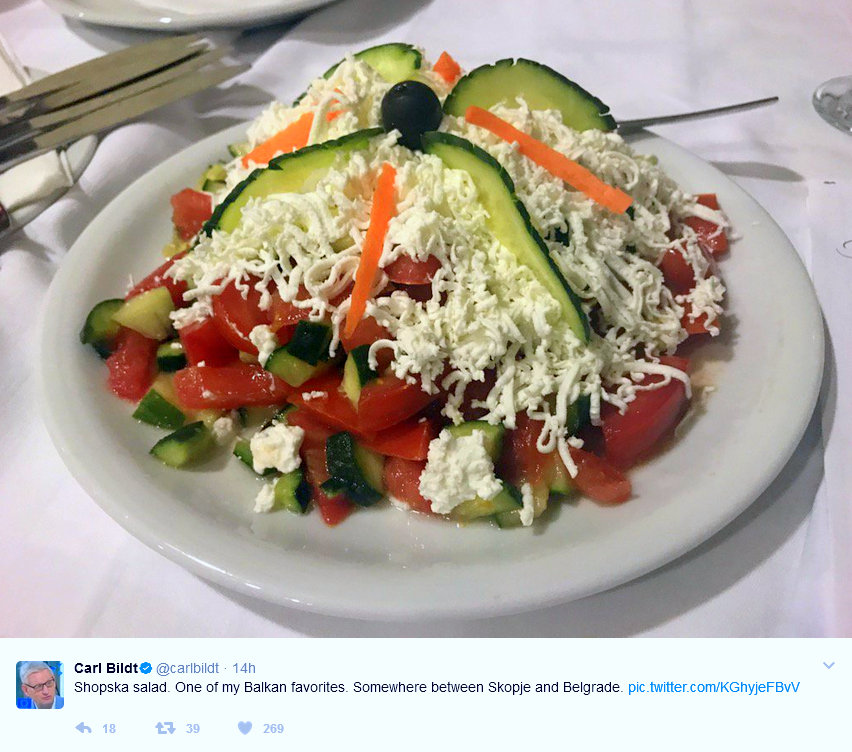 Carl Bildt’s study visit took place in a heavily poisoned political environment and amid accusations by pro government radical media outlets that the former Swedish chief diplomat belongs to a George Soros backed NGO and serves interests contrary to the stability of Macedonia.

No wonder after leaving Macedonia, and on his way to Belgrade, Bildt decided to tweet a photo of his favorite Balkan dish, the ‘Shopska Salad’, as a bitter synonymous resemblance of how messy Balkan politics looks today and how huge the challenge of the European Union in finding a long-lasting solution for a region which was once nicknamed the ‘powder keg’ of the old continent.

A series of resignations, expulsions and disciplinary proceedings have brought simmering disputes inside Serbia’s junior ruling party to the fore – says BIRN. Nenad Borovcanin, a prominent member of the Socialist Party, the junior partner […]

Bucharest, Romania – Over 100,000 people gathered downtown Bucharest on Wednesday evening protesting against the recent criminal law changes passed overnight by the Romanian Government. This is the largest street protest in Romania in the […]

Mogherini to visit the Balkans amid growing political turmoil

Tirana Echo – Federica Mogherini, the EU’s High Representative for Foreign Affairs and Security Policy and Vice-President of the European Commission, will travel to the Western Balkans from 1 to 4 March. She will visit Albania, Bosnia […]

Kosovo President: ‘No Turning Back’ On Kosovo Army Despite NATO, U.S. Warnings

Kosovar President Hashim Thaci says there is “no turning back” from his plan to transform the Balkan country’s lightly armed security force into a national army, brushing off strongly voiced concern from NATO and the […]

EU tells Macedonia leaders to stand aside or face sanctions

Macedonian leaders risk sanctions if they continue to block a new government and stoke inter-ethnic conflict, EU mediators dealing with a crisis in the Balkan country have warned. Gjorge Ivanov, Macedonia’s president, has refused to […]