By Shellie Karabell  – The Albanian Prime Minister turned up at his offices in Tirana for our interview wearing what he called his “painting clothes”—denim work shirt and jeans, lightly paint-spattered.  Edi Rama had spent the holiday morning at a friend’s atelier—as he does once a month—in front of an easel pursuing the passion that was his first career before becoming the Labor Party prime minister of his native land in 2013.

It has not been an easy time or task, dragging the poorest and one of those considered the most corrupt nations in the European continent out of the dark ages and into talks hopefully leading to the country’s eventual accession to the European Union in the next wave of enlargement scheduled for 2025.

The Road To Europe

Albania officially petitioned for EU membership in 2009 and was given candidacy status in 2014. In between, the EU made it clear that Albania was expected to make five key concessions in order to open accession talks: public administration and judicial system reform, combating corruption and organized crime—which meant a fight against drug trafficking and cannabis cultivation—and improving human rights, including protection for minorities and respecting property rights.

While far from complete, the efforts to date have paid off: the EU has just announced that Albania will begin accession talks at the end of June, pending unanimous approval by the EU’s 28 member states.  Rama is confident of that approval and points with pride at what his government has achieved thus far.

“We have instituted the vetting process for judges and prosecutors and 17 have been removed,” Rama told me during our interview. “One, for example, was removed because the source of his wealth could not be justified. We will find replacements. We have good schools. And for the time being, there is an old saying here, ‘Better to have an empty cradle than one with the devil inside.’ ” Though tax reform and banking are not part of this stage of reform, Rana is also working on improvements in those areas. 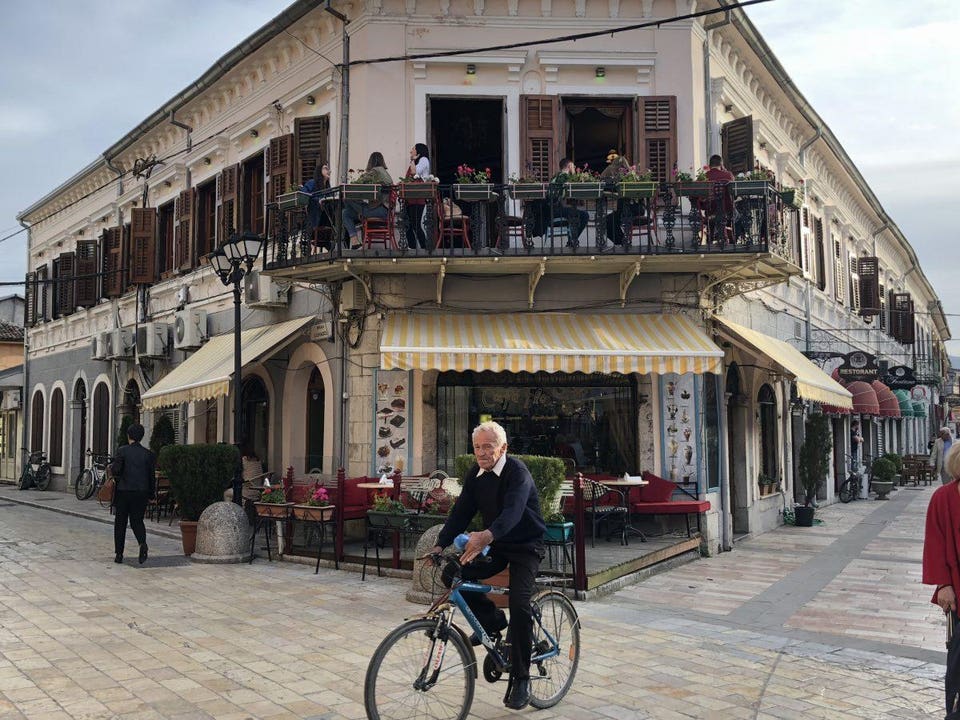 On the other key EU-requested reforms, Albania has opened centers for refugees and the homeless, while a crackdown on cannabis growing has drastically cut back that cash crop and is slowly replacing it with agriculture in the hopes of also cultivating an agritourism business. This has the potential to develop the inner portion of the country and to become the cornerstone of a booming tourism industry. For example, the Mrizi I Zanave restaurant, nestled in lush farmland less than an hour’s drive from Tirana, offers a kind of Balkan fusion cuisine, with original dishes created by chef-owner Altin Prenga, an Albanian who honed his craft in European kitchens in Italy and France. 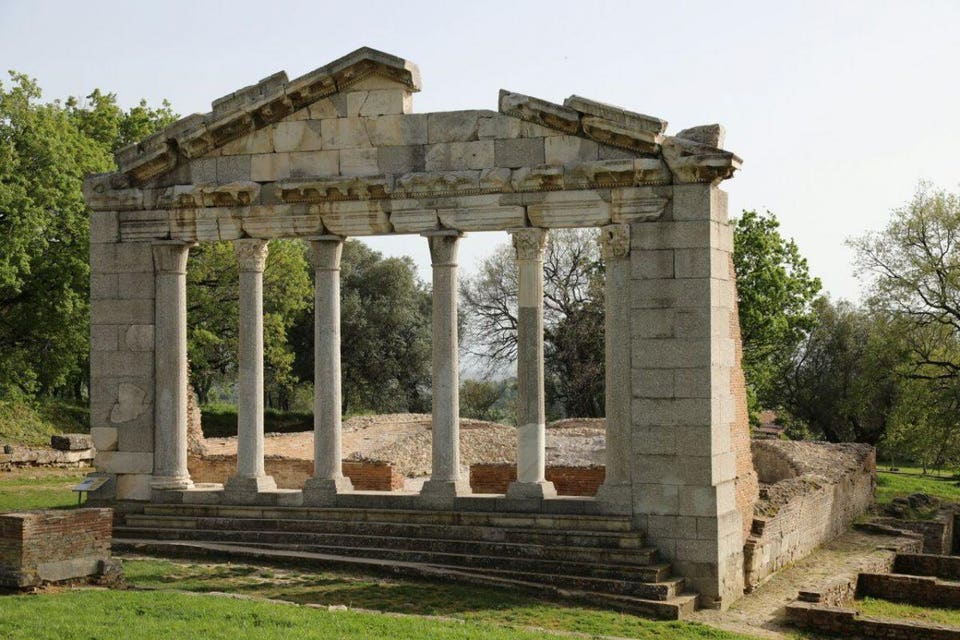 (Albania – April 12, 2018) The Apollonia Archeological Park, in southwestern Albania is one of the country’s three  UNESCO World Heritage sites. This ancient city flourished in the 4th century AD as an important economic and trade center. The ruins were discovered in the beginning of the 19th century.

It’s this sort of initiative that underscores the 40 million euro joint grant to Albania from the EU and the European Bank for Reconstruction and Development (EBRD) for the purpose of developing the country’s tourism industry—and creating thousands of jobs to boot. In addition to the restaurant/agritourism scene, there is a lot in Albania with which to work. The country’s landscape and traditions are home to thousands of years of human history and civilization: Greek and Roman cities and temples from the pre-Christian era when Albania was an important naval and trading outpost; Roman Catholic and Orthodox churches, Turkish mosques. In modern times, Mussolini’s 1939 invasion actually left the country with several decent buildings and strong cultural and financial ties to Italy (Italian is practically the country’s second language). Following the Hoxa Communist era, proselytizing evangelicals introduced other Protestant faiths. The result is a level of egalitarianism unusual for the Balkans.

But there’s a long way to go. While Albania may have a Mediterranean climate, 296 miles of coastline along the Adriatic and Ionian seas, acres of mountains and three UNESCO historic sites, it is sorely lacking in some key tourism essentials: the number and caliber of hotel rooms, safety handrails along ancient steps and pathways, clean beaches and trash-free countryside, efficient transportation and access. That’s all on Rana’s to-do list.

Tourists from neighboring Italy already have access by ferry from Brindisi and Lecce, and soon there will be more direct flights from Europe. “We are launching our own airline company, Air Albania, this summer,” Rama confirms. “We’ll expand our existing flights with Italy, Germany and the UK and the neighboring Balkan states, and we are building an airport in Vlora, in the south near Greece, where the best beaches are.” The airport, a private-public partnership, is being partially financed by Turkey’s Cengiz Construction company.

(Berat, Albania – April 11, 2018) Byzantine iconography at an Orthodox altar in Berat castle, a UNESCO World Heritage site, dating from 600 BC. The castle houses both churches and mosques.

Albania is already somewhat of a destination for the budget or adventure-loving traveler (nearly four  million people visited Albania in 2016 according to international tourism statistics), but Rana has his sights on the five-star market.  Four Seasons and Marriott are said to be looking at properties and sites in the capital. “We want to be the kind of destination Italy was some years ago,” Rama says. “Small, with a lot of beauty and positive energy.”

The process of adhering to the EU’s list of demands has been tough but important for the country, says Rama. “It’s been a roadmap for state building and institution building. It’s helpful for the organization of our country. It’s not a question of whether joining the EU is the right path; it’s the only path,” he says.

But for all his vision and hard work, Rama is not universally cheered by the country’s three million inhabitants. My informal litmus test of taxi drivers and merchants in the capital, asking about their feelings regarding the state of Albania today, turned up similar responses from a dozen or so people chosen at random: corruption in politics is rampant, we pay too many taxes and for what, infrastructure is a mess, and George Soros is actually in control because he’s paying for everything. Rama has faced this kind of outrage in person in the Albanian Parliament. For example, in mid-April, Democratic Party opposition leader Lulzim Sasha and other MPs threw flour, water and eggs at the prime minister, protesting the continued incarceration of anti-government protesters this spring—Rama’s 6’4” frame making him an easy target. (The flour-throwing MPs were suspended for six days, and Rama’s agenda passed parliamentary vote that day.) Rama concedes Albanian politics are “raw.”

As he is plotting the path for Albania, Rama is also plotting the path for what he calls the third part of his life. “The first part was for art,” he says, referring to his past as an art professor and artist who has exhibited worldwide, including in New York, and who designed the wallpaper now installed in his office. “Now I’m a politician. I can run for office for the rest of my days, but this is not what I want to do. EU accession will take more time than I want to spend in politics,” he avers. Popular thinking has it that Tirana’s dynamic, well-educated, multi-lingual charismatic mayor, Erion Veliaj (born in 1979, in office since 2015), is Rama’s hand-picked successor who will lead the country into Europe. It’s interesting to note that Rama’s own path to the prime minister’s office began as mayor of the capital city.

For the future, Rama says he wants to do something in the third phase of his life that has to do with taste. Taste? “Lifestyle, painting, sculpture, industry . . . taste,” he says. “And maybe something with cooking. I like to cook.”