Albania has had a political romance with the Chinese since the days of Soviet Communism, and now it’s become an economic one. While the U.S. remains focused on criminal justice and other reforms, China is focusing on development. As a result, despite being across the Adriatic Sea from Italy, Albania is as close to China in many respects as it is to its leading trading partners.

From thousands of miles away, Chinese investment is helping modernize Albania, which is still many years behind its neighbors. Last March 2016, they became Albania’s second-largest trading partner, leaving behind traditional trading partners like Greece and Turkey.

Within the top five trading partners, no one has accounted for export growth out of Albania like the Chinese, up over 6,000%. “We have a long history together that really came out of forming an alternative to Soviet communist ideology. I think that history helped make the transition into the more economic, pragmatic relationship we have now,” says the country’s speaker of parliament, Ilir Meta. Meta has been speaker since 2013 and is from the Socialist Movement for Integration Party of Albania. He was in Washington recently for the inauguration of Donald Trump. “China invests in Albania. We have a robust trading partnership with them now and it’s beating our traditional partners in Europe.” Meta said certain regulations also made it harder to close business deals with Europeans.

Meta was in Beijing in October signing deals with PowerChina, a construction conglomerate that has irrigation and other projects in Albania. In theory, when the Balkan countries along the Adriatic become members of the European Union and the euro-zone, assuming the euro survives 2017, the Chinese would have a foothold that rivals traditional neighbors.  The U.S., meanwhile, is trying to bring Albania up to snuff in terms of rules of law and government transparency. For Albania, the two are complimentary to its future.

So what is China doing in Albania exactly?

In March, Canada’s Banker’s Petroleum announced the sale of oil exploration and production rights to affiliates of China’s Geo-Jade Petroleum for a price of 384.6 million euros. Banker’s started to exploit the Albanian oil fields of Patos-Marinze and Kucova in 2004, and since 2014 it has been the largest foreign company in the country. A month later, China Everbright and Friedmann PacificAsset Management announced the acquisition of Tirana International Airport in a 10 year concession deal. Though a second Albanian airport is scheduled to open for service soon, Tirana will remain the most important transport hub. It is one of the fastest-growing airports in Europe, with annual passenger rates rising from 600,000 in 2005 to two million in 2015. It’s China’s.

Albania is also part of a pipeline project connecting Caspian Sea natural gas from Azerbaijan to Europe. The Trans-Adriatic Pipeline is supposed to bring in around 10 billion cubic meters of natural gas from Azerbaijan through a 211 kilometer pipeline in Albania where it will cross the Adriatic Sea to Italy. To get this done, a number of dirt roads need to be paved; bridges need to be modernized. So much of Albania’s countryside has not changed since the days of communist rule.

“Our goal is to be one of EU’s energy hubs, really, and of course China knows this,” says Meta who met with Azerbaijan parliamentary leader Ziyafet Asgarov recently to discuss TAP in Tirana. “We’ll be an integral part of this Trans-Adriatic Pipeline and get transit fees for that, which is good for the country. Good for the Balkans.” The European leg of TAP is slated to be operational by 2020. The total investment in Albania by TAP is estimated to be 1.5 billion euros.

Transportation is improving in parts in Albania, thanks to Chinese money and the massive infrastructure demands required by TAP. But improvements are more stark in places because Albania, in many respects, is starting from zero. So in contrast, scores of European Union countries have not moved up the competitive rankings at score card enterprises like the Doing Business Report while Albania has. 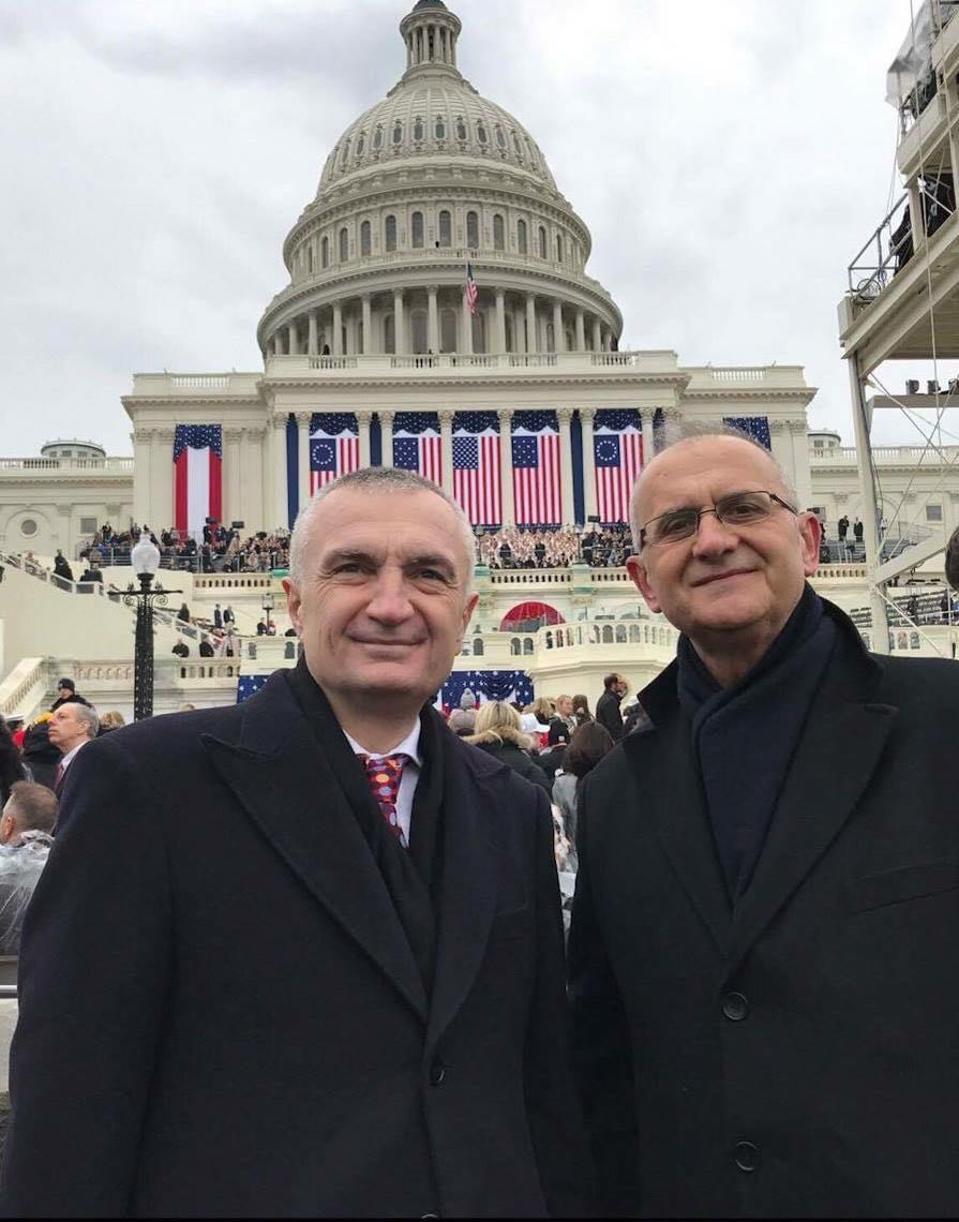 “The entire region is in convergence with the E.U. now,” say European Bank of Reconstruction and Development (EBRD) analyst Peter Sanfay.

In general, the Balkans compare poorly with their E.U. neighbors on nearly every level. This is one of the main reasons behind the prosperity gap in the region, of which Albania is no stranger. Italy, right across the Adriatic, may as well be another world entirely.

The failure to make efficient use of talent, the reliance on informal networks rather than on professional management, the lack of business sophistication, and inadequate infrastructure are among the main problems facing Albania and the region, according to a white paper published online by EBRD. In other words, labor in Albania is cheaper than in the rest of Europe and even in China. Will low cost labor prove to be an asset in Albania’s development? Not unless the rule of law is taken seriously. Which is where Washington comes in.

Those who have met Meta say the country is moving in the right direction, and business leaders as well as political figures should “respect the fact” that it was only 25 years ago that Albania began moving away from its old totalitarian ways. “I think Meta is very practical and understands Albania’s history,” says Alan Bersin, the former head of Policy and International Affairs at the Department of Homeland Security under Obama.  “Meta knows the country’s transformation is going to take a generation, but he is one of the leaders of Albania who is the custodian of this transition from an economically backward and corrupt country to the Albania that mostly everybody wants – a vibrant economy, a democratic society and the rule of law,” Bersin says.

This Could Upend Progress…

Albania is not the country it was back in its Communist Party days. It’s now known, unaffectionately perhaps, as the “marijuana mecca” of the Balkans. For the past two years, Albanian drug enforcement officers have been trying to eradicate drug trafficking. It’s has arguably become one of Albania’s worst public relations problems. The Chinese do not look at this challenge positively. They want no trouble for their investments.

Organized crime syndicates, allegedly with the support of some politicians, are believed to produce about 900 metric tons of cannabis a year, worth about 4.5 billion euros ($6.1 billion) – roughly half of Albania’ s GDP.

Top officials have been accused of failing to do enough to stop Albania’s role in Europe’s drug trade. Some have even been accused of protecting—and even covering up for—those involved in it. So in December Albania released their new drug enforcement laws in hopes to accomplish two things: cut the drug dealers off at the pass, and make Albania safe for investment. The fight against drugs remains a key issue to Albania and one of the obstacles to obtaining EU membership. The new policy opens the door for security companies in particular, which is not a necessary forte of the Chinese. Despite the growth of hard drugs in the Balkans, Albania’s main drug is marijuana and is the only illicit drug produced in Albania. Under the new rules, Albania’s government said it will use aviation surveillance and invest in technical equipment to make monitoring such sites from a distance more feasible. According to the report, the key side effect Albania is hoping for is “to establish the rule of law,” of which will force some of the country’s leaders to take corruption seriously.

Earlier this month, Albania’s drug drama placed the U.S. Embassy in Tirana at the center. Ambassador Donald Lu denied travel visas to 70 prosecutors, the Albania’s General Prosecutor’s Office said. In response, Prosecutor Adriatik Llalla, very publicly insisted that the decision was personal. Only members from one party were denied visas, which got the ruling Socialist Party to question why the State Department was pushing so hard and fast on criminal justice reform and singling out government officials from one group only.

Meanwhile Ambassador Lu said in local English language press reports that Speaker Meta was vital to the role of advancing the implementation of judicial reforms. “Meta’s role was critical in adoption of constitutional amendments in July 2016,” he reportedly said. Lu’s office did not return requests for comment made via the State Department in Washington regarding the visas. The State Department does not comment on why visas were denied.

Some of the first pipes arrive for the Trans-Adriatic Pipeline (TAP) project in Durres, Albania, Monday, April 18, 2016. Albania is the only Balkan country that is part of the 545 miles natural gas pipeline project. (AP Photo/Hektor Pustina)

Still, in the end, none of this geopolitical drama is making China a hard sell for the Albanians, who see Washington picking sides.

Outside of the complex political landscape and its myriad allegiances, Wall Street, meanwhile, just looks at Albania as another Balkan junk bond. Last year, JP Morgan and Bank of America went on an Albanian road show selling its frontier market B+ rated debt to institutional investors. They issued a $300 million bond. It was oversubscribed by around $150 million.

Going for yield is one thing; investing in Albania’s physical economy is another. And that’s where China clearly comes in. Foreign direct investment stock has reached nearly 50% of the country’s GDP, mostly in the oil, metal ore, infrastructure, construction and telecom sectors. The Chinese think that the Balkans and other ex-communist countries outside of the European Union will play a role in its Silk Road project. It also gets money out of China, and develops markets for Made in China goods — whether its steel rebar or heavy machinery.

Wealthier Balkan nations are already in on the China act. Macedonia and Serbia are on this metaphorical Silk Road to Europe. Other countries are trying to reap the benefits of Chinese investment. Albania is one of them.

Arian Spasse, director of the Albanian ministry of foreign affair’s special department for relations with the European Union, said that even though Italy and Greece are his country’s natural partners, the recent economic crisis forced Albania to look elsewhere. China comes with less red tape…and much less foreign intrigue. Albania’s not complaining.

“We are on the road to European integration,” says Meta. “Our only hope is that the E.U. investment here will improve. China sees us as an opportunity. We are happy to have them.”

Source: Forbes – By Kenneth Rapoza ,  Contributor
Opinions expressed by Forbes Contributors are their own.

The European Bank for Reconstruction and Development (EBRD) and the European Commission (EC) are stepping up their joint efforts to promote energy efficiency across the Western Balkans. In the latest push, the EC is providing […]

Europe and the US face a challenge in the Balkans

As they fretted over where, after Ukraine, they would confront the next challenge from Vladimir Putin’s Russia, the EU and Nato may have been looking in the wrong place. The most immediate danger now lies […]

Three men from Kosovo and an unidentified minor have been arrested in Venice on suspicion of plotting to blow up the city’s celebrated Rialto Bridge, Italian police said Thursday – while father of arrested says […]