The UN Security Council in New York has become the perfect arena in recent years for senior officials from Kosovo and Serbia to trade barbs and accusations, and this week’s session was no different.

It has become common practice at the Security Council sessions to discuss the quarterly reports from the UN Mission in Kosovo, UNMIK, for both sides to compete to see who can make the most scandalous accusation – while back in Europe, at talks in Brussels, they both reiterate their engagement to the ‘normalisation’ of relations with each other.

This week, Kosovo’s ambassador to Washington, Vlora Citaku, spoke eloquently about the number of people killed during the war, the damage caused and the people still missing, while reminding Serbian President Tomislav Nikolic, who was also attending the session, that his country should be held responsible.

In Pristina, people applauded her speech. But when her words are analysed in more depth, they appear inconsistent with Kosovo’s approach to dealing with the past.

Until August 2015, Citaku was been an important figure in the Democratic Party of Kosovo (PDK), whose former leader, the current president of Kosovo, Hashim Thaci, signed a ‘landmark’ agreement with Serbia in April 2013 as a result of the talks in Brussels.

Although Thaci was a key figure in the dialogue, he never brought to the table the fate of the 1,600 people who are still missing from the war, or demanded reparations from Serbia, despite the pressure from Kosovo society to bring up these issues during the talks.

Therefore Citaku’s passionate speech was inconsistent with Kosovo’s foreign policy efforts and the stance taken by her former boss Thaci.

At the UN Security Council, Citaku even went further: “If Serbian logic would have been applied, Nuremberg trial would have convicted Roosevelt, Eisenhower, Churchill and de Gaulle, not the Nazis,” she said.

However, this begs the question: why is the government of Kosovo committed to dialogue with a country that follows the political logic of the Nazis?

At the previous Security Council session on Kosovo in November 2016, Citaku started her speech with the words: “There cannot be reconciliation with neighbouring Serbia if this country is not held accountable for the crimes committed in during the last war in Kosovo.” 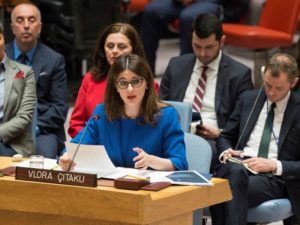 Hashim Thaci is currently preparing to establish a Truth and Reconciliation Commission, in which families of Albanian and Serb war victims are participating along with civil society activists, members of the diplomatic corps and religious figures in an attempt to deal with the past.

Although it is in its initial stages, and without wanting to prejudge, it is already known that the Truth and Reconciliation Commission is not aiming to demand any apology or reparations from Serbia.

It could also end up being a strategy to falsely show readiness to deal with the past.

Many observers in Pristina viewed Thaci’s initiative as a way to ‘save’ himself from prosecution by the new Hague-based special court which is expected to try senior Kosovo Liberation Army members.

Thaci’s effort will also be seen as reluctant because he said in 2015 that Kosovo was considering suing Serbia for committing genocide in the war. It seems as though this idea has already become obsolete.

Back in New York, such etiquette is not new at the UN headquarters when Kosovo and Serbia face each other, when bizarre comparisons are made, chiefly for domestic political advantage or to satisfy that nationalist voices that are still loud in the Western Balkans.

The readout from another session in August 2015, when Thaci had the role of foreign minister and faced his Serb counterpart Ivica Dacic, was an example of this.

Talking about Pristina’s bid to join the UN cultural body UNESCO, Dacic compared the damage to Serbian Orthodox churches in Kosovo to the actions of Islamic State.

“The desecration and destruction of the cultural and religious heritage in the Middle East by ISIL [Islamic State] is met with worldwide outcry and condemned as terrorism, whereas those who desecrate and destroy the Serbian cultural heritage in Kosovo and Metohija seek membership in UNESCO with a pat on the shoulders as an act of reward,” he said.

His statement came just a year after both he and Thaci, alongside former EU foreign policy chief Catherine Ashton, were nominated for the Nobel peace prize for their role in the Brussels dialogue process by theProgressive Alliance of Socialists and Democrats group of MPs in the European Parliament.

In fact, if observed carefully, it seems that the Security Council sessions can act as a measure of the genuine state of reconciliation in the Western Balkans.

This might serve to disillusion those who believe that Kosovo and Serbia have normalised relations since their engagement in the EU-mediated Brussels dialogue started in 2011.

The speeches at the UN should serve as lesson for the EU in particular to rethink its approach towards the Balkans because mapping out the future without dealing accurately with the past seems unlikely to bring any sustainable peace.

European-funded infrastructure projects to connect the former foes are more than welcome, but at the same time, the stick must be used as well as the carrot to ensure that both Kosovo and Serbia deal with the past and address the fate of more than 1,600 people who are still missing from the war that they fought.