The official request by global luxury brand Gucci to hold a fashion show at the Parthenon in Athens on June 1 has caused some uproar in Greece. According to newspaper Eleftheros Typos, the company has also asked to record the fashion event, but the chances of the Greek authorities accepting its request are slim.
According to the local media in Greece, the Central Archaeological Council (KAS), which is responsible for examining permits for the use of archaeological sites for commercial purposes, will convene on Tuesday and is expected to turn down the request on the grounds that it is too significant a site for such use. 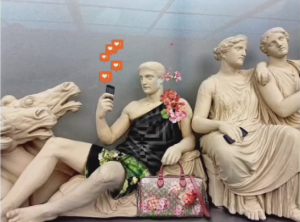 The final decision lies in the hands of the Minister of Culture, Lydia Koniordou who will decide on whether the show will proceed. However, she is also expected to take a negative stance on the request.

Gucci has launched a campaign named “Dionysus” and wishes to promote its line by using the ancient site in Athens. The fashion company had come under fire in the past by UNESCO Piraeus for dressing up ancient Greek statues in bags and fashion accessories.

The European Parliament has urged the Commission to take reciprocal measures against US nationals over America’s failure to lift visa requirements on citizens of Bulgaria, Romania, Croatia, Poland and Cyprus. MEPs have called on the […]

Kosovo’s president has called on NATO to support the transformation of its security force into a regular army with heavy weaponry. President Hashim Thaci sent a draft law to parliament last week seeking approval to […]