The 25th James Bond, which is as yet unnamed, might be using the same locations as Game of Thrones, Star Wars and Robin Hood. Speaking exclusively to The Dubrovnik Times the former mayor of Dubrovnik, Andro Vlahusic, stated that “It has always been my biggest wish to have James Bond in Dubrovnik.” Apparently negotiations have been ongoing for a few years and it would now seem that these negotiations are coming to an end.

This would be the first time that James Bond has filmed in Croatia and would be certainly one of the largest film productions in Dubrovnik. The latest Leonardo DiCaprio movie, Robin Hood: Origins, is currently filming in the historic Old City of Dubrovnik, starring Jamie Foxx, Jamie Dornan, Eve Hewson and Taron Egerton as Robin Hood. This multimillion budget blockbuster is, according to Vlahusic, the largest most expensive ever movie ever filmed in the city. According to reports the estimated budget for marketing and promotion will be around $100 million. 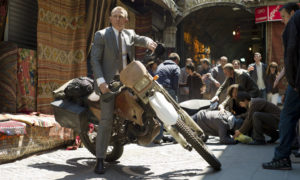 Already reports of the new James Bond planning to use Dubrovnik have appeared in fan sites and blogs. And the former mayor is completely behind the project “James Bond has always been my favourite, and negotiations are ongoing,” he reported to The Dubrovnik Times. “We are in negotiations with all of the key people involved in the James Bond franchise. When we made the deal with Star Wars for the filming of The Last Jedi of course I had to keep it to myself, and after filming was completed the city has shown that there isn’t any technical question or logistical question that we can’t solve,” added Vlahusic.

Of course there are many pieces of the James Bond puzzle that need to be completed before Dubrovnik can dream of hosting 007. After Sam Mendes announced that he will not be directing the 25th Bond movie a new director needs to be found. And then there is the slightly larger question on who will actually play Bond.

The impressive list of movies and serials filmed in location in Dubrovnik, or Hollywood on the Adriatic, could well be adding James Bond.